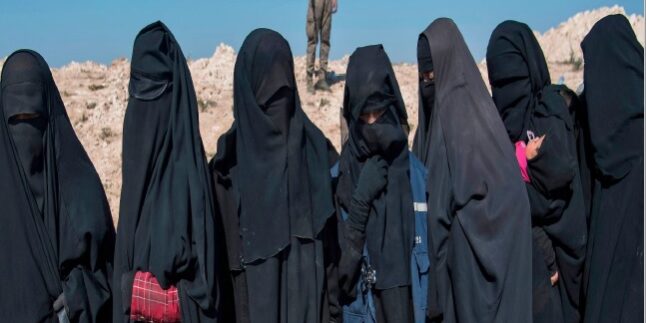 A report from the International Center for the Study of Radicalization suggests that 41,490 international citizens became affiliated with ISIS since 2014. 13% of these were women, and 12% were minors. This report, however, acknowledges the lack of more specific data available regarding their time embedded in the terrorist group. Some went to the caliphate knowing the extent of its violent acts against nonbelievers, some went seeking the promised Islamic paradise. Some committed atrocities themselves. Some, including those who committed violent acts against nonbelievers, were themselves subject to gender-based violence. Some were children when they were recruited.  A threshold framing question for both scholars and legal professionals is to decide if they are viewing female ISIS members as victims, perpetrators, or both.  As one scholar claimed, “it is somewhat difficult to accept women as perpetrators and supporters of violence within organizations that subordinate women and employ gender-based violence. In any case, misconceptions and gender stereotypes obscure the scope of women’s participation and commitment.” Yet, reports by other ISIS victims paint some of the ISIS women as perpetrators of violence. Other accounts (particularly of younger girls) clearly see the ISIS women as victims themselves. What is most likely is that there is a spectrum between victim and perpetrator, with the ISIS women falling along the entire spectrum from perpetrator to victim, to a combination of both.

Analyst – Counter-terrorism- South Asia Desk (USA)
Twitter
Maia Brown-Jackson is a Development Analyst at Together Central Buganda and an Editor at Fletcher Security Review. She was a Research Intern at International Institute for Counter Terrorism, Herzliya, Israel. Ms Jackson also worked as an Educator with Yazda, a global Yazidi organization, on its Women & Children Trauma Victims Rainbow Support Program. She has also worked with Yazda as a Manager on its 2014 Yazidi Genocide United Nations Assessment Report. She is currently pursuing her Masters in Law and Diplomacy from The Fletcher School of Law and Diplomacy, Tufts University. Her field of study is in Human Security| International Security Studies and Perceptions of Governance in Nangarhar, Afghanistan. She writes about Islamic State and can speak Spanish as a second language.
Share this post
Share on FacebookShare on Facebook TweetShare on Twitter Pin itShare on Pinterest Share on LinkedInShare on LinkedIn Share on WhatsAppShare on WhatsApp