The Theory of Rebellion Against the Ruler in Islam 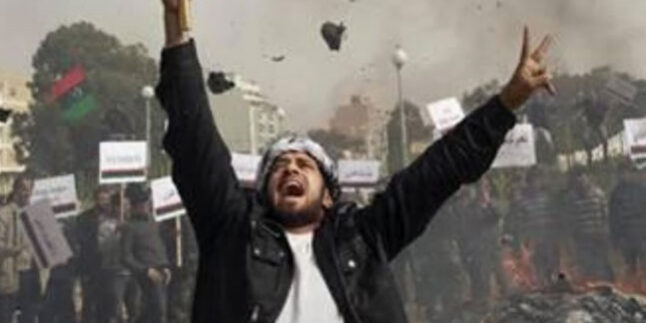 The act of rebellion against the democratically elected regimes in Islamic or non-Islamic countries is a core principle of political Islam, which is not associated with the teachings of Islam, whatsoever. The message of Islam is to protect the elected ruler from such violence that overthrows the governments. The style of overthrowing the elected governments through violence came from Leninism and Marxism ideology. The Leninist and Marxist ideology instigated people to take the law into their hands and thus began a so-called revolution against the elected governments.

Islam rejects such rebellion in the name of ‘revolution’, whether it is a violent revolution or a non-violent one. Islam names such acts of anarchy as a ‘Fitnah’ (mischief) and there is serious punishment for such Fitnah (mischief) in Islamic law. There are some cases from the early period of Islam where two caliphs who succeeded the Prophet of Islam faced such political rebellion. Those rebellions, in the times of two Caliph Uthman and Ali, shed a lot of blood of Muslims. The subject of rebellion has always been an issue of concern for Muslim jurists because of the several instances of rebellion in the early Islamic period.

The question arises that how would we define violent or non-violent rebellion because some people or organisations named it ‘freedom of people’, ‘freedom of right’. In his landmark study of the Islamic law of rebellion, Khaled Abu El Fadl defines rebellion as “the act of resistance or defying the authority of those in power”. He says that rebellion can occur either in the form of ‘passive non -compliance with the orders in those in power’ or in the form of ‘armed insurrection’. Regarding the target of a rebellion, Abu El Fadl says that it could be a social or political institution of the religious authority of the Muslim scholars.

Now the point is this, does every violent opposition fall under the category of rebellion? That depends on the type of rebellion. Every violent opposition to the government or state cannot be called rebellion because the rebellion connotes a high intensity of violence and defiance of the government. Muhammad Hamidullah, a renowned scholar of Islamic international law says about rebellion, “if opposition to government is directed against the certain acts of government officials it is insurrection, the punishment for which belongs to the law of the land.” He further asserts that if the insurrection is intended to overthrow the legal established government on unjustifiable grounds, it is mutiny.

If we look at all these terms (rebellion, insurrection and mutiny) in the rule of Islamic law, they are classified under the category of Fitnah and there is a serious punishment in the Holy Quran for those who spread Fitnah or mischief on earth, whether this fitnah is against an individual or against a government even if it is a tyrannical regime.

We need to understand the exact meaning of rebellion under the Islamic law. The concept of Islamic law comes under the doctrine of Fasad fi l-ard (disturbing peace and order in the Land).

According to Sadia Tabassum, lecturer in International Islamic University- Pakistan:

“There are various forms of fasad and the ruler has been given the authority under the doctrine of siyasah for maintenance of peace and order in the society.”

There is no khurooj (civil disobedience) against the ruler even though he is evil or barbaric, Muslims are not allowed to rebel against such elected political leaders. The Prophet of Islam (PBUH) clearly warned his followers to follow their political leader, whatsoever situation could be risen.

The Prophet is reported to have advised one of his close associates, Hudhayfa:

“After me there shall be political leaders who will not be guided by my instruction nor shall they follow my custom (Sunnah/practice). Moreover, there shall rise among them men whose hearts shall be the hearts of devil in the frame of human bodies.”

Hudhayfa asked: “What shall I do when I find myself in such a situation?”

This was a warning of the Prophet to Muslims to obey their leader, even if they are cruel to them, because if they rebel against their leaders, there would be great fitnah (mischief) on earth.

The second form of rebellion is calling for strikes and protests. Taking part in strikes and protests is a beauty of democracy but it is not allowed in Islamic law because it is feared that it will create Fitnah. People take advantage of strikes, often turning them into armed conflict, and the cost of the armed conflict is intense and is faced by the people as well as the ruler. To challenge the writ of Law is as dangerous as terrorism because it often ends with a bloodbath of the general public. Syria and Libya are good examples of that.

“During the time of the ruler, al Ma’mun, many scholars were killed because they refused to accept his order and say that the Quran was created. He killed so many scholars and forced the people to say this statement of falsehood. Despite this, we have never heard that Imam Ahmad bin Hambal, or any other of the leading imams, ever carried out strikes and protests in the mosques. We have also never heard that they used to publicly spread his (the ruler, Al- Ma’mun) faults just to instil within the peoples’ hatred and enmity against him….”

Therefore, there is no concept of political demonstrations, strikes, protests or similar actions in Islam. A fire, as you know, always begins with a single spark and only then becomes a burning blaze. So, the political strikes or demonstrations are like a single spark of the fire which creates a bigger fitnah (Mischief) which could potentially lead to the killing of innocent people.

To stand firm with your leaders and pledging allegiance to them is not only an important act in Islam but also a commandment of the Prophet of Islam (PBUH).

“The prophet of Islam (PBUH) commanded that when a person sees something he dislike from his leader that he should preserve with patience.” (Al Bukhari).

Mr Noor Dahri is the Founder and Executive Director of ITCT. He has studied Forensics and Criminal Psychology from Oxford and studied Counter Terrorism from the University of Maryland – U.S.A as well as from the International Institute for Counter Terrorism ICT- ISRAEL. He’s the author of “The Hydra of Radicalization: The Scourge of Global Extremism”.